And to clarify, this is a good thing!

Maybe you haven't all heard the news: Microsoft is developing a new ASP.NET MVC framework. Go check out the original story for details. I'll cut-and-paste the featureset directly lifted from Jeffrey Palermo's entry:

If that was too much for you to read, allow me to attempt to summarize this visually: 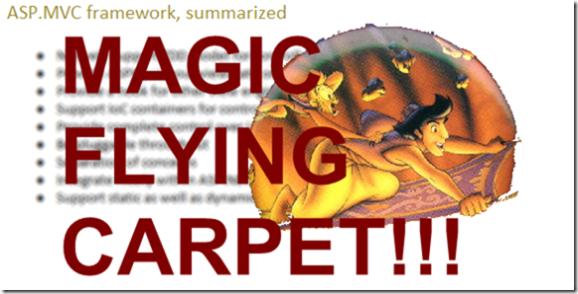 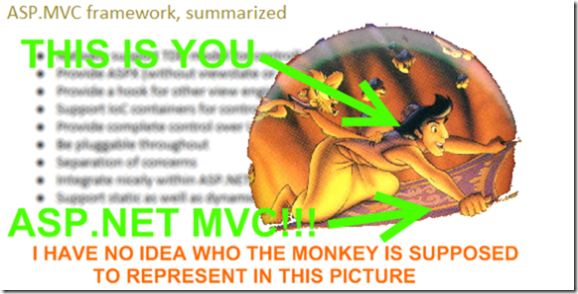 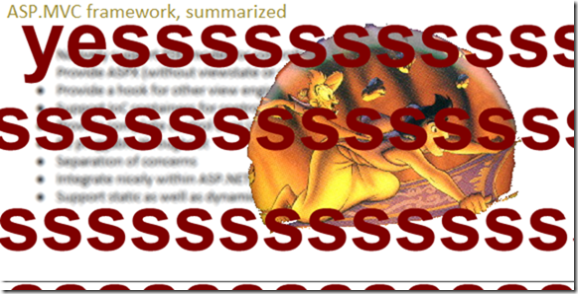 Now I don't want to sound like I'm going overboard with pre-release enthusiasm--this announcement is significant not because we're getting "new stuff." Microsoft has, uh, announced new stuff before.

The key difference with this announcement is, as far as I know this is the first time Microsoft has released something new that bears absolutely no resemblance to FrontPage Server Extensions.

If that last sentence just made you angry, sorry: that wasn't my intent. Let me try to approach this from a different angle. I'm going to attempt to say the exact same thing in a different way; here goes: for once, we are not being treated to a new data grid, or a new designer, or a new UI stack (well, we are, kind of), or a new way to talk to databases, or another remoting/marshaling/service framework. We're not being treated to demos that tell us we can build applications "without a single line of code."

Maybe you haven't seen that demo before. You'll know when you see it.

A third way to describe this is that Microsoft is, for once, moving away from the smart UI approach to software development.

Take your pick of descriptions; whichever one offends you the least is the one I meant to say.

I'm not a mega-expert in a general sense, so I don't want you to quote me on any of this.

"Well Peter," you may ask, "where does SharePoint fit into all this?"

First, I will again point out that I'm not a mega-expert, so don't attach too much weight to my opinions. With that disclaimer in mind:

What makes this such a complex subject is that SharePoint development cannot be summarized as easily as traditional imperative programming. While SharePoint allows for what is known as artifact development (loosely defined: stuff you change in Internet Explorer or FrontPage), SharePoint also exposes a deep object model, a stack of web services, and an underlying XML schema for everything (yes I mean CAML). This mix of web services, API and XML is referred to as assembly development (let's just call it "programming").

Dealing with SharePoint primarily as a programming platform, on par with "build it from the ground up" frameworks like ASP.NET, is certainly my goal. But even once I think I've mastered all there is to know about SharePoint; once I've built my own collection of tools and scripts to make all aspects of SharePoint development tolerable; once I have a sufficient library of samples from which to borrow on any project; once I can effectively answer the questions like "how do we patch an in-production SharePoint application"--at that point, SharePoint development at its pinnacle will still not resemble the new ASP.NET MVC framework. Let's do this by the numbers:

I don't want this post to sound too negative regarding SharePoint, but it's probably too late, what with all the red marks above. Unfortunately this is the truth: if you're doing SharePoint development, you should realize that "high quality code by default" is nowhere in the SharePoint playbook. SharePoint provides a lot of benefits; it's just that "designed for software quality" isn't one of them.

I swear I'll get positive and gung-ho on SharePoint and post all about it here.

One topic I'd like to work on later is the feeling I get sometimes that I'm performing alchemy. Today I discovered that the SPLimitedWebPartManager will happily give you a collection full of ErrorWebParts, for most of the webs in a site collection. Sometimes. The web parts work (most of them); it's just that when you visit them using the SharePoint Object Model, they are transmutated into ErrorWebParts.

So what do I do to fix this? Look for more opportunities for using blocks? Poultices and cremes? Try accessing the deprecated SPWebPartCollection instead? Leeching? Attempt to unload, then reload the SharePoint assembly from my AppDomain to see if this fixes the problem? Attempt to rebalance the humours? Search Usenet? Search Google? Search the Technet forums? Examine the logs in Excel using lists and pivot tables? Examine the logs in Excel using qualitative mathematics (and no, Google, I didn't mean quantitative mathematics)?

It feels that way sometimes.