This may be good general advice, but today I just mean it in the context of using PowerShell's call operator (the glorious &, AKA "The Ampersand").

I could spend a lot of time building up to the good stuff, but I'll just get to the point. I'm going to run "echoargs" which most recently helped me troubleshoot calls from PowerShell to MSBuild.exe. You'll see why I need this utility soon enough: 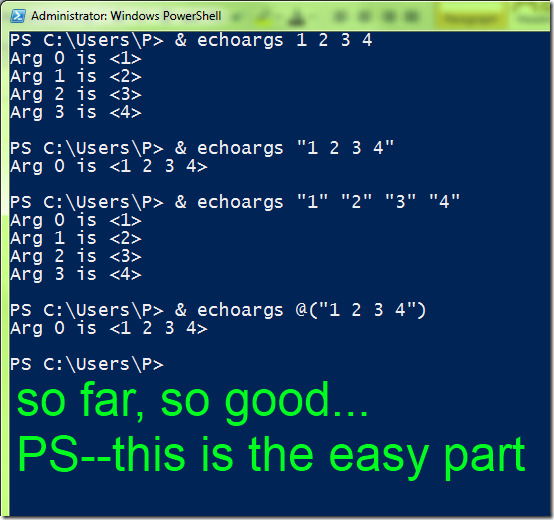 Okay. That was the easy part. So far, when calling commands from PowerShell using the call operator, everything is pretty much working as expected. Now let's try something…different…: 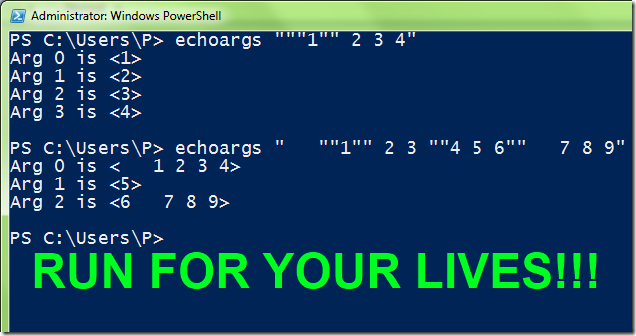 I'm not exactly sure what to say here. The first example is a thinly-obfuscated real-world head-scratcher I've stumbled into over and over and over. The second line, I wrote to try and make some sense out of PowerShell's parsing rules. And when I got the output for the second line I can only make sense of by using parsing rules like "throw away some of the quotes, then start parsing" and "if the quote-marks are on the left side of the word, move them to the right". You won't find these parsing rules in an example in the dragon book.

So I kind of gave up.

You see, I had a longer, well-reasoned blog post planned out. In my pretend fairy land, I'd spend a few minutes doing research, master PowerShell's parsing rules, and write a helper method to encapsulate the weirdness so you and the rest of the world could live out your sheltered hobbit lives in the Shire, never understanding the service I provided for you. I'd be the Aragorn of this story, and would be pretty rad compared to you lame-os.

I even had a "reasonable explanation" for the weird behavior to link to here. And don't get me wrong, that's good information.

Lesson learned: don't be me

There's probably a better lesson to be learned, like

a) trust PowerShell's call operator syntax about as far as you can throw it, and

b) when you throw it, watch the skies carefully, or the moment you turn away PowerShell will boomerang back at you and aim for your throat.

Furthermore, echoargs.exe, which ships with the PowerShell Community Extensions, is built for the sole purpose of troubleshooting this kind of weirdness. It's useful, it's small, and it's safer than taking a boomerang to the throat every time you test.

Furthermore, when using the call operator (&), use the more explicit, longhand form. Even though it makes most calls unreadable to humans, for those of us who matter (the parser), it is clear as day. See screenshot + gaudy green text below: 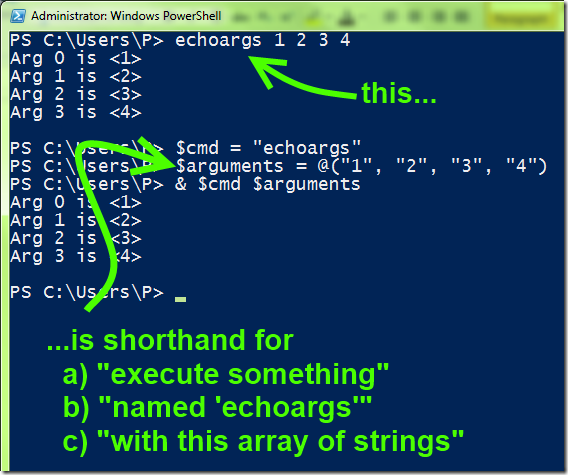 Furthermore, if you're writing a generic script that accepts input you can't control, and some of that input may or may not include quote-marks…find whoever is responsible for assigning you such a doomed task and punch THEM in the throat*. They deserve it**.
* don't do this
** they probably don't

By the way, if you know why these rules are the way they are, by all means answer the question here and I'll give you the appropriate whuffie or whatever they call it these days. And no, spell checker, 'whuffie' is not a misspelling.

Hope for the future

Just so you know, we may see a fix for this class of problem in PowerShell v3.