UPDATE GRAB BAG (2006-09-25): FoxIt has released v2.0, potentially fixing this bug! ALSO, FoxIt is not free for commercial use! So stop abusing the end user license agreement, you filthy pirate scum scumbag scum! Um, anyway, unless you're a big PDF user at home (and who isn't? Oh, I'm not. Yeah, I guess most of us aren't), you can't legally be using FoxIt. Sorry.

By now you've at least heard mention of an Acrobat Reader alternative named FoxIt.  I'm using it now, and for the most part, it's fantastic.

It's already better than Adobe's ever-ballooning product in several ways:

But, I'm here to tell you: it's not all gravy.  FoxIt reader version 1.3 crashes. I have proof! (shocking evidence below) 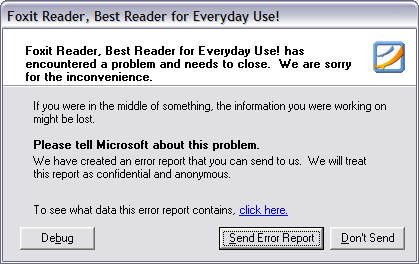 This is something I've rarely (if ever) seen covered elsewhere: I'm here to report that, contrary to all the positive buzz, those oddball third-party products allegedly ten times better/faster/stronger than the originals do have flaws.  I know this is incredibly outrageous, but it turns out: FoxIt PDF Reader is, in fact, not all gravy.

Getting to a point I'd like to make: not all productivity tools help. For an example, I'll pick on the Windows XP PowerToys ALT+TAB Replacement tool. To be fair to the original authors: I understand this was probably built off-hours as a labor of love, and I do understand a lot of work went into building this particular toy. Please excuse me while I rip on your creation.

As a short introduction: this PowerToy replaces the default ALT+TAB window with a larger window that shows screenshots of each of your windows. The idea is that you're given more information about each window at no cost--thus far, this sounds nice! Here's a screenshot of the Powertoy in action:

The problem is: using this PowerToy is actually worse than sticking with the standard Windows XP ALT+TAB behavior.  Let's do this by the numbers:

1. This Powertoy and Windows XP's ClearType do not play well together.  And by that, I mean that this looks brutally ugly with ClearType on. I've highlighted the important parts below, and no, you're not going blind--this is how it looks!

2. Believe it or not, I could live with the fuzzy, unreadable text shown above. But I can't live with the fact that this ALT+TAB replacement is noticeably slower than the original ALT+TAB behavior! In other words, a simple one-step 'tap ALT+TAB' operation turns into the following:

3. This PowerToy crashes.  Let me state this in unambiguous terms: it's not okay for a standard operating system feature to crash!  I know, I know, [[insert your witty Windows joke here]], but it's still not okay! Okay?

So what did we learn today?  Oh, I'm not finished yet--I'm just getting warmed up!  Let's keep rolling!

Why does live.com take seven (7) full seconds to load my search results?

I'll keep this short and sweet. Is there any excuse for this?  Why does the extremely web-one-point-oh non-AJAXified Google search load instantly, while the new and fabulous AJAX-powered live.com search require a noticeable delay? Want to know the answer? The full answer is complicated and full of technical jargon, but the short answer is this: I don't care at all why. I only care that I can literally run, read, re-run, read, and re-re-run searches from Google faster than using a single live.com search.  "instant=way better" is such a ridiculously simple concept, and yet no one seems to get it!

UPDATE (2006-09-25): Thankfully Microsoft has removed the offending "enhanced search functionality" and both the toolbar and the search engine are (gasp) fast!

And that stupid XP search dog!

I'll keep this short, because everyone's already said it before, but: the out-of-the-box Windows XP file search experience is really, truly awful.  Let me do this purely by example.

I sometimes need to edit my HOSTS file for whatever reason; it doesn't matter why.  Unfortunately for me, I never can remember where that durned file is located! So what is any sane person to do?  Start->Search of course!

XP's search dog is so slow sometimes that I've actually kicked off a "XP dog search", then (while this is running!) taken the following steps:

Is Rover finished by this time? Nope!  Can anyone explain why running dir /s is so much faster than Windows' search? Anyone?

Oh, I'm not finished yet!

I've read Chris Pirillo's 65 Outlook complaints, and I'd like to take a different approach.  Instead of focusing on the left-right-center-justify alignment of text and color coordinating and font design and Chris Pirillo's other OCD complaints, we'll work on just one thing.  Just one.

For added impact, I'll attach some tasteful ASCII art and fly this statement around in a marquee. I'm not above using marquees, obnoxious colors and blink tags to get a point across (blinking effect subject to availability):

Why is responsiveness not priority #1? Or at least, high enough priority that they might, you know, tackle this problem within the first ten years of Outlook's first release?

If you've ever actually used Outlook (any version!), you'll instantly know what I'm talking about. This is so fundamental, and affects such a large user base--Outlook is the #1 Office application, and it's outrageously unresponsive!

Let me explain this by example.  This will only take a few steps, so you can follow along:
1. Click on a mail folder containing 200+ messages. Actually, any mail folder will do; the small ones lock you up too--yeah, even those.
2. Press CTRL+A (uh-oh!)
3. Try to do anything else while Outlook performs a Select All operation on your messages.  Years of experience has taught most of us to Just Don't Try That, Or Else.

There's no secret SHIFT+ALT+BACKSPACE keystroke to fix this; you'll just have to wait it out--or failing patience, kill outlook.exe.

This is ridiculous. Why, with my multi-billion instruction processor running at 10% capacity, with half a billion bytes or more of available RAM, and an incredibly huge and reliable network pipe, does my email application give me problems?

Now you may say: "Outlook loads Internet Explorer components in order to render HTML mail and RTF and Office Smart tags etc etc."  Let me borrow an argument from above: I don't care why. I don't care about the why, and after this many years and this many releases, I don't want to hear any excuses.

And let me state this again for the record: this is not about Outlook's speed. The 2007 beta actually runs faster than 2003 in several areas, including the CTRL+A scenario mentioned above, and including mail rules processing (yes, it's all much faster).  I don't care*!
*Okay, I do care about speed, and yes, Outlook can be unbearably slow. But today we're all about triage: responsiveness comes first!

In fact, I am willing to sacrifice speed for improved responsiveness.  This may not be a ridiculous trade-off as (for whatever reason) using multiple threads may be slower than sticking with a single thread.

Is anyone working on fixing this? Given Outlook's track record, the answer's definitely "no."

UPDATE (2006-09-25): This bit about Outlook must have been subliminally placed in my brain by Microsoft's marketing. Why, you may ask? Two reasons: 1. I keep sending Outlook beta error reports, and now that I think about it, those error reports are categorized as "Non-Responsiveness." 2. Vista's performance team is focusing primarily on consistent performance (AKA responsiveness), specifically mentioning that they are not focused on "small bursts of speed". So anyway, they're Working On It.
But all of the above still applies--Outlook's still terribly unresponsive...at least for now.

I honestly started this off as a quickie writing about FoxIt crashing. I've certainly, uh, deviated from that.

If I can leave you with just one thought, let it be this simple series of SAT-style associations:

Feel free to leave your own word-association games in the comments. Any day now I'll reach that "lifetime weblog stats: five plus comments" milestone, and with your help, that day could be today!