I'm here today to present the case against a particular piece of NUnit's fluent syntax. But before I do, let's set up a concrete example, something that gives the test meaning. Instead of just writing something down in boring old plain text, I've sloppily remixed a work of art I found via an image search and retitled it "Rebellion Against the (overuse of unrelated, Creative) Commons(-licensed images)!": 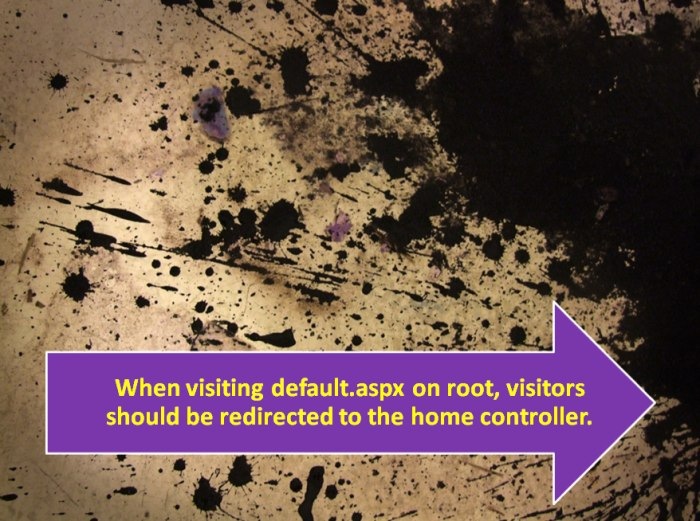 Solid. Requests for ~/Default.aspx should redirect to the Home controller. Let's get on with the show.

Here is a comparison of the Assert.That syntax, the traditional Assert.AreEqual syntax, and the syntax provided by MSpec's NUnit extensions (MSpec isn't the only framework with these extensions, it's just the one of which I'm familiar):

I don't like the Assert.That syntax, in this scenario.

Look at all that. The new syntax is just...ugh.

I've read elsewhere that it's good because it reads like a sentence. Well, to shock you into elevated awareness, may I jog your memory of something else that reads a lot like a sentence? In case you didn't dare hover over that link, allow me to properly title it:

Check out the action in the linkage section!

Okay, conflating "reads like a sentence" to COBOL is a sucker punch, it's unfair. Let's do this by the numbers.

Comparing the three ways to do the same thing

In all cases, the fewer, the better.

* "Intellisense is necessary" is roughly defined as "any point at which you can use Intellisense." Definition is left purposefully imprecise.

I could go on for a bit about this, but I'll let the fancy HTML table do most of the talking. If there are any takeaways from this oversized-for-its-topic post, let them be:

I'm complaining today specifically about NUnit's Assert.That(actual, Is.EqualTo(expected)) syntax. I'm not down on the Assert.That() syntax as a whole, just the most commonly used method. And maybe that's what's bugging me--Assert.That has a lot of great stuff in there, allowing fuzzier comparisons beyond simply .AreEqual(), but the most commonly-used scenario is measurably worse than the old syntax.

And the Assert.That(actual, Is.EqualTo(expected)) syntax isn't the worst thing ever. It's not the end of the world. But shouldn't it be better than the thing it's replacing, not worse?