I am sometimes asked what PowerShell is. While it's easy enough to give a technical overview, today I'll focus on everything else.

PowerShell is not a fly-by-night scripting tool

It isn't JScript, and won't disappear anytime soon. For the three JScript enthusiasts remaining in the world, I apologize for the cheap shot. Wait, no I don't. It's JScript--no one's using it, no one will be offended.

PowerShell has had a rapid rise since it reached beta status in late 2006, and if you're wondering if this positive trend will continue, let me lay it out for you eloquently:

WHY YES IT WILL, AS A MATTER OF FACT

You may have already heard that Exchange 2007 uses PowerShell for its administration console. Which is great, but I personally couldn't care less--I've got bigger fish to fry.

IIS 7: PowerShell provider. Ok, I like this. Still in beta though, we'll give it some time before any "visible enthusiasm."

administrative duties for Microsoft products going forward - pretend the link to the left is from an authoritative source. Because had I better searching skills, it would be. The point is: major Microsoft server products will begin to support PowerShell in the same way as Exchange 2007 (which again, we couldn't care less about).

If all that hasn't convinced you, maybe the visual aid below will: 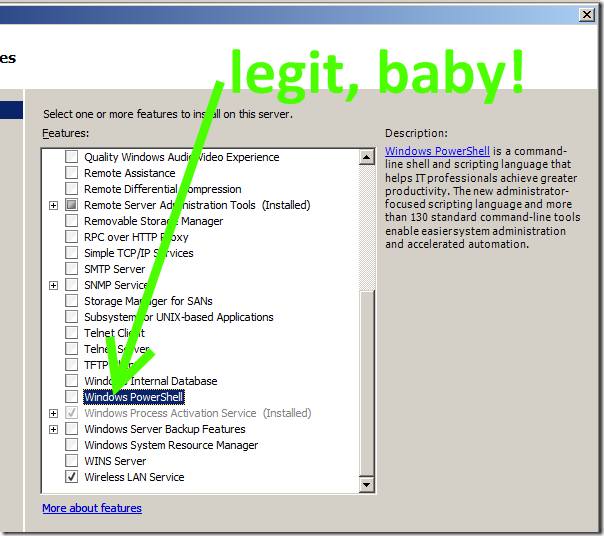 In Windows Server 2008, PowerShell is an available Feature! We're beyond installers; PowerShell is now built into the operating system! This is even true of the older Operating Systems--if you don't believe me, try uninstalling PowerShell! Can't find it? That's because (in the older OSes anyway) it's installed as an update to Windows, as a standalone hotfix. Hotfix, hotness! If I was rapping I could make "hotfix" and "hotness" rhyme. I could  pull it off.

PowerShell is not going to replace the command shell (cmd.exe)

I briefly thought this would be the case, then Server 2008 Core dashed my hopes. While I admire the engineering-won-over-marketing victory that allowed Server Core to ship with almost absolutely nothing, including all of the .NET framework, I wish we could have simply declared 2008 as "year of the PowerShell" and Server 2008 as "the painful version for the PowerShell laggards." That would have been awesome.

But, as it turns out, Server Core did indeed ship without PowerShell, and as such, we still have cmd.exe available to us, awful parsing rules and all (e.g. try the following: echo "greater than sign is >" - I assure you that will not produce the desired effect). Anyway.

You are not wasting your time learning PowerShell

PowerShell doesn't have to be slow

I've read that the PowerShell process will be slow loading the first few times. Which is terrible, because many of us won't make it past those first few times, especially those of us who are cynical of the whole thing to begin with. I assure you, it gets faster.

I'm not telling you to pick up PowerShell to satisfy your yearly programming language learning quota. I'm also not telling you PowerShell will change the way you code in Java or COBOL or SNOBOL or FORTRAN or RPG or whatever. I will instead say that I have saved myself time (and more importantly, aggravation) with PowerShell, whether by spelunking the SharePoint object model, completely automating tasks, or running scripts as post-build actions on my Visual Studio projects...

PowerShell saves me time. And if it doesn't save me time, then it's saving my sanity. And if it isn't doing either of those two things, then it's probably pulling in some mixture of .NET framework classes, using enhanced filesystem/XML/registry support, AD stuff, COM objects, and yes, even running other console applications--it's pulling any or all of these things into one environment, in a way you won't see anywhere else. PowerShell is the de-facto scripting environment for Windows--in fact I used to call it "Perl for Windows, except Perl for Windows already exists, and actually competes directly with PowerShell." Yes, I can't help myself when describing PowerShell and say the quote in full, all the way to the end of the long rambling sentence (like this one (it doesn't seem to ever end)). Well, let me set the record straight as to PowerShell and Perl:

PowerShell is better than Perl

There, I said it.