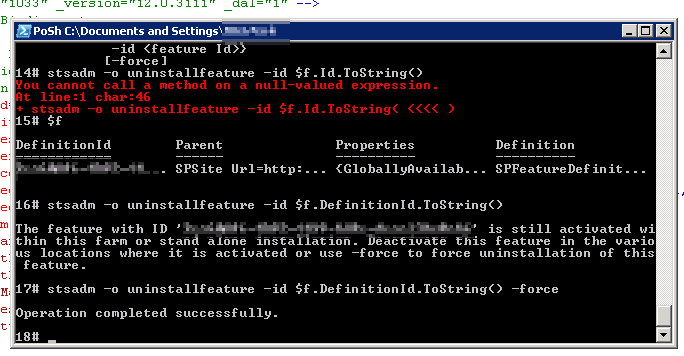 The single line (#17) in the image above calls stsadm.exe (a console command) and passes several arguments to it: 1) a bunch of SharePoint stsadm junk/raw text, and 2) the GUID of the feature I was trying to remove.

What is certainly most uninteresting is the SharePoint details; this was development-VM administrivia. What is certainly interesting is that I have run the PowerShell interpreter where needed to grab the Feature's GUID, but sent the rest of the text directly to the console application without surrounding anything in quotes. Try and point out, on line #17, where DOS ends and PowerShell begins.

Aside from all the interpreter nuttiness, this was super useful and saved me heaps of time*, so there was some practicality involved as well.