The title above subtly implies I'm some kind of professional SlickRun enthusiast. Which I am. I'm running SlickRun on three physical computers, two functioning virtual machines, and until recently, one virtual machine I lost in an accident (RIP SharePoint VM, E 2007 Eternal). SlickRun is one of the first things I install on any new machine I encounter.

As I find SlickRun's default settings intolerable, one of the first things I do post-install is click-click-click uncheck uncheck delete key delete key tap tap tappity. (All this creative onomatopoeia is the sound of me at work configuring SlickRun). Since I've installed SlickRun fresh 6+ times recently, I've pruned my configuring down to the Best of the Best--both the literal best of the best efficient configuration, and in a metaphorical sense, the Best of the Best karate movie. That was an awesome karate movie.

Oops! I forgot: Introduction to SlickRun

SlickRun, for those of you who are not aware, is a productivity-enhancing unobtrusive program launcher that enables you to:

The SlickRun manual, in ten (10) words or less

If nothing else, at the least make these two changes:

I actually didn't like SlickRun when I first installed it. Why? Because SlickRun's out-of-the-box experience is an annoying one--by default, SlickRun adds itself to the system tray and throws an obnoxious blue bar in front of all other windows.

Anyway: In the Setup screen, configure the Options tab: 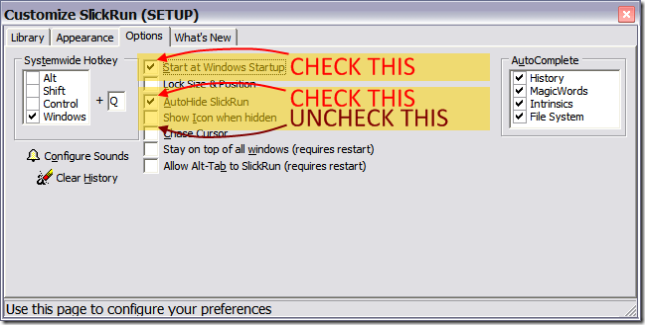 ESSENTIAL #2: Get rid of the awful preset MagicWords

SlickRun comes bundled with one (1) useful MagicWord: the Google one. Everything else is useless and needs to go.

You can use the mouse and click your way through the deletions, but I've found the magic keystrokes to be:

Repeat rapidfire DOWNARROW, ALT-D, Y until you've deleted everything. Except the "google" MagicWord; that one's golden.

I don't want to present the following as MUST HAVES; instead, I'll just say that I have found the following to be personally useful, and I believe you will as well.

This picture expresses everything I want to say on the subject:

Citation: props to Ben for this tip. Detailed instructions are posted immediately below: 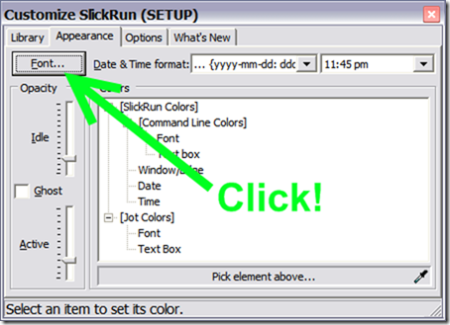 USEFUL #2: Google search at the prompt 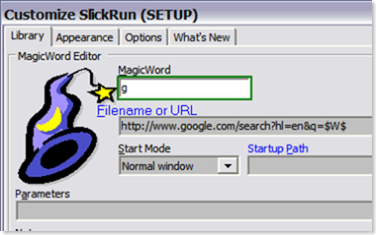 POP QUIZ, HOTSHOT: how few keystrokes do you need to run a search?

(I am aware Vista has improved the search experience such that it is reduced to literally one keystroke. That's totally awesome, and I'm sure we'll all be enjoying this "one-keystroke search" feature when Vista R2 SP1 arrives sometime in 2009).

I will also note here that SlickRun has a form of autocomplete that is similar to typing an address into your browser--if you've typed your phrase before, SlickRun will "guess ahead" at what you intend. What I mean to say is that SlickRun finds more ways to make itself useful!

Let's assume your default browser is Firefox and not Internet Explorer. Let's just say. How do you open up an IE-only site in the browser?

We'll focus on SlickRun today. Let's try doing this by practical example (this is something I have set up today):

EXAMPLE: You need to connect to your Virtual Server administration website. This site runs a heavy-duty ActiveX control and thus should only be opened inside of IE. Your default browser is (by accident I'm sure) set to Firefox. What is a quick, painless way to access the Virtual Server site?

It should be obvious to note that we use SlickRun to launch programs.  Duh. What is not obvious is that you probably shouldn't set up all your programs in a "SlickRun big bang go-live"; instead, add new programs to the SlickRun launcher only when you realize, for example, "I use Paint.NET a lot." If you add too many programs at once, you won't remember your SlickRun aliases for them. As Nacho Libre says, "Take it easy!"

I read eBooks, and I'm not ashamed. Go ahead, poke fun.

I use this eBook often--and what is most telling about how much I rely on SlickRun is the fact that I have no idea where on my hard drive I copied the PDF--only SlickRun knows. I "set it and forget it" in the purest sense.

I've been experimenting with running small PowerShell scripts whose sole purpose is to  copy something to the clipboard. To accomplish this, I'm using the fully-functional Set-Clipboard cmdlet (thanks Keith Hill) that is bundled in the PowerShell Community Extensions.

These "clipboard scriptlets," while useful when I type them into the PowerShell  interpreter, are so much more useful because I can launch them directly from SlickRun. One option of running scripts is the traditional way:  create a script file, and set up a command to run the script file (e.g. "powershell.exe C:\a\get-something.ps1"). A new option we're presented with is to use powershell.exe's "-command" parameter--sometimes I embed all of the PowerShell code inside the -command parameter, meaning these little clipboard scriptlets reside entirely inside of SlickRun.

One example of the simple little things I did was create a random GUID inside of PowerShell and copy the new GUID onto the clipboard. Because (for whatever reason) the GUID tool in Visual Studio was not available, this was my best option. And yes, SharePoint is at times GUID-hungry, (SharePoint is the hungry hungry hippo of GUIDs, and yes, you can quote me on that) so I know I've used this a dozen times at least.

Anyway, while this [Guid]::NewGuid().ToString()| set-clipboard is easy enough to run in an open PowerShell prompt, it literally took 15 seconds to set this alias up in SlickRun. SET IT AND FORGET IT!

TIME ELAPSED: TOO EXTREME TO ACCURATELY CALCULATE (OUTSIDE OF TOLERANCES)