This post is a grab bag of information, techniques, and landmines I wish someone had told me when we first set out to run our build/deploy on top of TFS. What follows is a short, all-positive compilation of everything I’ve learned about TFS 2010. I’ll assume you work with TFS on a daily basis, and thus won’t attempt to explain TFS concepts (shelving, for example).

All-positive means that I will not complain about TFS. I will not. I’ll only provide helpful workarounds I’ve found.

Between TeamCity and TFS, having used both in two environments and having recently used the newest versions of both, I’d prefer TeamCity in a landslide. I can fire off out a bulleted list of specific ways TeamCity is better, but in the interest of staying positive, let’s just move on.

If in doubt, don’t automerge. If you are having problems with TFS merges, you can solve all your problems by manually merging every file.  TFS 2005 was notoriously bad at auto-merging (i.e. performing server-side merges), so the only way to win, was not to play.

In TFS 2010, I will 99% certify that automerging works. TFS 2010 has improved, and our team has had almost perfect success with automerging, though there are hiccups here and there. We’ve had merging issues, but I’m not convinced our merging issues are automerge issues. 99% is pretty good. Let me know in the comments if you can definitely blame TFS 2010 automerge for a botched merge.

Replace your client-side merge tool with one you can trust. The built-in VS2010 merge/compare tool works. However, I had “an incident.” “Incidents” are bad when merging. What happened is, the VS merge tool mistakenly matched up two entirely different methods and attempted to “merge” the changes. Merging the contents of method A() into method B() is bad. It’s bad enough to go looking for a replacement. So, following these instructions, I replaced the built-in merge tool with Perforce’s free P4Merge.

Weird merge conflicts with renamed files? Accept the lesser victory and step a) delete, then step b) re-create any files that cause weird merge issues. This breaks the file’s version history, but solves your bigger problem.

I know lots of you have problems with TFS and how it deals with files. I don’t. I don’t know if I’m just not exercising the tool enough, but I’m not having problems, now that I know what not to do. Specific advice follows:

Don’t go offline. The consequences can be worse than you think. I’ve never had success with offline mode, and what’s worse, until you go back online, the Team Explorer hides your TFS server from the list. I’ve had something of a traumatic experience with offline mode, so it’s hard to stay positive or even fake sound positive when describing offline mode. Just don’t go offline unless you know how to get back online. For the record, I’m using the newest of the new with TFS 2010 and Visual Studio 2010, and even so, even with the newest tools I’m experiencing problems. I’ll give a blanket recommendation that you don’t try it.

This goes against advice I’ve heard. I’ve heard that TFS source control is more manageable from the command-line than via Visual Studio. But for me, I prefer to let Visual Studio’s integration automatically check out files for editing. So, whenever possible I work underneath the protective umbrella of Solutions and Projects.

Remember TFS does not automatically track file changes, not even partially like SVN or git. This means:

Check out files in Source Control Explorer to edit. Or, reworded:

If you don’t follow these steps in order, you’ll experience bad things. Notably, if you try to check out after successfully editing a file, you’re presented with a merge conflict.

Shelvesets work. Trust them. Use them. Use them frequently. Make as many of them as you want. Give them dumb names if they contain trash (I have shelvesets named “aaaaaaa” and “aaaaaaaaaaaa”, and of course, one named “help”). You can find them later, just sort by date. Easy.

Always shelve from Source Control Explorer to keep things simple. If you Shelve a Solution, you may miss files. I’ve missed files when I shelved a Solution. Don’t be me.

Switching from NUnit is a cinch. All the attribute names are different, but only slightly. In With the exception of one MSTest feature:

Learn about localtestrun.config and how it works. We’ve started using it, and while it’s convenient, it’s essentially a non-composable* way to copy files you need for your tests.
* i.e. once you start using localtestrun.config, you can’t just switch to NUnit or XUnit without some pain. Alternately, if you had coded up manual file copying, you wouldn’t have any issues converting to or from NUnit/XUnit.Also, the localtestrun.config may be responsible for our extremely slow test runs.

The test runner is excellent…and slow. It’s not entirely the test runner’s fault, as the Resharper test runner is equally slow (I’ve tried). I gave up using Resharper’s test runner when I found out it was just as slow, and has imperfect (broken) localtestrun.config support. Note, tests are slower by a large factor if you’re running code coverage.

If not for the slowness and the occasional bug and some wonky behavior during debug sessions, I’d say the VS test runner is as good as Resharper’s test runner or TestDriven.NET. Short note about TestDriven.NET: like VirtualBox, it’s not free for corporate use. Read the EULA.

IntelliTrace sounds nice, but crashes test runs. We turned it off so it stopped crashing our test runs.

Learn the keystrokes for running tests. CTRL+R, t. CTRL+R, a. Similar key chords to run tests with the debugger attached. If you forget the keystrokes, go to the Test->Run menu and they’re listed there. Just memorize them.

Ignore most of the Visual Studio testing features. They do not help you write unit or integration tests. Specifically: 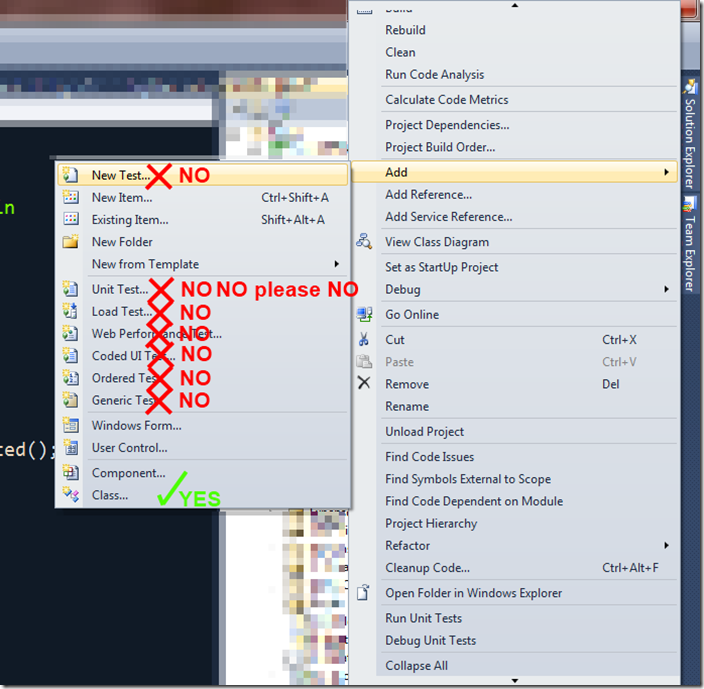 Start from an empty class when writing new unit tests. While the “Basic Unit Test” template works (and is an excellent tool to help you learn the MSTest attributes), a clean file is better.  Apply YAGNI. You don’t need a TestInitialize or ClassInitialize method yet, so don’t add them. You can add either of them later, if you need them. For now, leave them out. YAGNI. This is what one of my new test classes look like:

*note: I am using this naming convention presently. It’s not so bad. We add the class name prefix to the method name (UrlHelper_) so test results can be sorted and understood and so there aren’t hundreds of “When_etc” names in a row. And yes, I’m aware that you can add columns, specifically the test class’s full name, to the test results display, but it’s not a first-class citizen and doesn’t help when running tests in the build. Stay on the rails and just embed the class name in your test method. Side note: sometimes I need to split out my test classes to support more than one test fixture (context) per class-under-test, and I do so. Read up on test fixtures and class-per-fixture if you’re intrigued as to why I’d want such a thing.

If you have a bad test portfolio (i.e. “our tests suck”), it’s not MSTest’s fault. Using NUnit, XUnit, MSpec, or any of the (literally 20 or so) .NET BDD frameworks will not help you if you don’t have the basics. MSTest is indeed limiting in some ways, but I’m far more limited by my coding/design knowledge than MSTest itself. With not much extra effort, you can be successful with MSTest. So, now that we’re not blaming MSTest, how do we improve our bad tests?

Learn about unit testing, integration testing, acceptance testing, ATDD, BDD, design by example, context/specification, behavior testing, UI testing, “subcutaneous” UI testing, functional testing, end-to-end tests, fast/slow tests, design tests, outside-in tests, mocks, stubs, fakes, doubles, what to test, what not to test, when to delete tests, when to apply DRY to your tests and when not, how much to maintain your tests, how to organize your tests, the misrepresentation of test fixtures as TestClasses, using automocking tools, using IoC with tests, using object mothers, using test builders. Dealing with threading. Using SQLite in-memory with your ORM to speed up your integration tests. I can’t tell you how to write your tests or why today. Everyone else (“the entire internet combined”) can.

Troubleshooting: if a test just flat-out isn’t running, find it in the test list (Test->Windows->Test List Editor) and ensure it is enabled. Disabled tests just don’t run. MSTest allows you to disable tests via the test lists view, presumably because … I don’t know why. But it can be done, and it’s really weird when someone does it and I can’t run a test and I don’t know why.

I don’t know what to do with the .vsmdi file either. Check it in and try to pretend it doesn’t exist. It stores such things as the mysterious “Test Is Enabled” flag, and details for any test lists you may have, and all of these wonderful things. If you accidentally break the vsmdi file after checking it in, use the power and magic of source control and revert changes.

Related: If you need to disable a test, use the [Ignore] attribute like every other framework. Don’t argue, just do it.

Related: I haven’t found a use for test lists. I’m applying YAGNI and ignoring them until I can figure out how to use them. Don’t use test lists unless you know why you should.

TFS as a continuous integration server

First, let me define build machine as the computer on which your TFS build agent runs. Bueno. Let’s get rolling.

On your build machine, restart the build agent every evening to prevent slowness caused by memory leaks. Don’t argue, just do it, particularly if you notice your builds slow down after a while. If you’re horrified by the thought of restarting services as a rule, you should look into the wealth of options IIS provides to restart unhealthy app pools. You’re not alone. According to Unix guys, It’s the Windows way. Give in and just run the following script as a Windows Scheduled Task every night:

Run only one build agent at a time, per build machine if you’re running MSTest. If you have one build machine, one build. Two machines, two builds. One per machine. Why, you ask? MSTest aborts test runs if you run two MSTest runs simultaneously. I don’t know why. If you run NUnit or just skip unit tests altogether, you can run more simultaneous builds. But to avoid phantom build failures, don’t cheat and just run one build at a time.

Similarly, don’t log into or log out of the build machine while MSTest is running, as it will abort any running MSTest test run. Seriously. I have a theory as to why this is so, but it doesn’t really matter why. Just know that, if you’re running tests, don’t log in or out.

TFS has a tray app called “Build Notifications”. Use it. It works for notifications, which arrive within a few minutes of build completion. One caveat: unlike TeamCity, you are not notified when a test run begins to fail, but when the test run completes.

The tray app’s build status screen cannot be trusted to be accurate, so leave the tray app alone and just use Visual Studio/Team Explorer to look at your builds. In other words, use the TFS tray app only for the alerts. 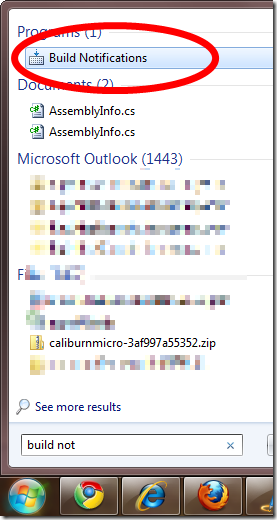 Refresh doesn’t work on the build status screen in Visual Studio. It’s buggy and doesn’t properly refresh all the time, sometimes misplacing running or completed builds. To work around this behavior and truly refresh, close and reopen the window.

Work in progress – part 2 to come

Hello everybody! If I’m ignorant of something that would solve any of the problems I’ve experienced above (notably, speeding up test runs would be GREAT), let me know.

Assuming I get up the gumption, I’m also going to write a second post covering: